SHENZHEN, China, Nov. 18, 2019 /PRNewswire/ — To mark the 80th anniversary of the VDNKh exhibition centre in Moscow, the Russia-based oil company LUKOIL opened an interactive training centre in the historical Oil Pavilion in September to celebrate the achievements of the Russian oil industry. The Acclaim A27 series by Absen (SZSE: 300389) was utilized in the Oil Exposition. 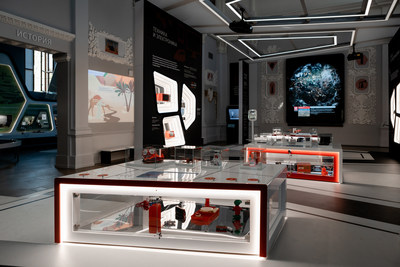 Covering more than 1,300 sqm, the new Oil Pavilion is Russia’s largest multimedia exhibition dedicated to the national oil industry. Split across four rooms, the pavilion features 70 different installations. Visitors are taken on a tour to learn about the history of the industry and to discover the full production cycle of a vertically integrated oil company, from production to refining and marketing.

Various cutting-edge display technologies are on display, including LED, projection, VR, AR and holographic technology, turning the Oil Pavilion into a fun and interactive exposition for visitors of all ages.

Absen’s multi-award-winning Acclaim A27 series was selected in the project to deliver an expert display solution. A27 is Absen’s fastest growing product series, which combines the benefits of both LED and LCD display technologies. For example, its 27.5″ diagonal 16:9 aspect ratio and high level of colour uniformity, brightness and contrast make it the preferred solution for system integrators looking to deliver video walls into corporate, retail and control room environments.

A total of four Absen A2712 video walls were installed in three of the four different halls themed: ‘Humankind andOil’, ‘History’, ‘Technologies’ and ‘Science’. The first hall, Humankind and Oil, featured a 3.1m x 3.8m rectangular LED display with a pixel pitch of 1.2mm, which was used to display graphics and video content of oil facilities and equipment. In the same hall, a customized screen consisting of 22 LED panels was deployed to display content about the role of oil in transport vehicles. The third screen adopted a 3×7 configuration, which was installed in the Technologies hall, was used for presenting the end-to-end oil production process. Finally, a screen consisting of 53 Absen LED panels, which was wall-mounted in the Science hall, served as a reliable presentation solution for speeches and training sessions.

Absen’s sales manager of the CIS market, Jackie Gao, added: “Having visited the new Oil Pavilion, I was very impressed with the exhibition and it really delivers the wow-factor! Our partner did a fantastic job at designing an AV solution that expertly integrates the different technologies and we are proud that Absen LED played a starring role”.

Established in 2001, Absen (SZSE: 300389) Optoelectronic Co., Ltd is a Chinese manufacturer of high quality LED display solutions. The company is renowned for its global presence, full-service capability and high quality products for the live events, broadcasting and rental staging industry and is present in over 120 countries.

https://syrianewsgazette.com/absen-led-enhances-visitor-experience-at-russian-oil-exposition/2019-11-18T12:03:33+00:00Asianet PakistanPress Release
SHENZHEN, China, Nov. 18, 2019 /PRNewswire/ — To mark the 80th anniversary of the VDNKh exhibition centre in Moscow, the Russia-based oil company LUKOIL opened an interactive training centre in the historical Oil Pavilion in September to celebrate the achievements of the Russian oil industry. The Acclaim A27 series by Absen...
Asianet Pakistanasianet-pakistan@pr.asianetpakistan.comContributorSyria News Gazette