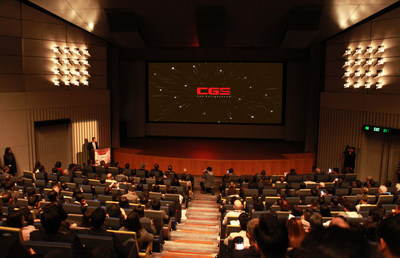 CGS was officially setup in 2011 and has completed five generations and two major technological breakthroughs within seven years. From the commercial operation of the first CGS cinema in 2012 to the completion of more than 330 setups today, CGS has proved itself as one of the most dynamic and fastest growing PLF brands in the Asia Pacific region as well as the global film industry, as the result of its world-leading technologies, including mega-sized screens, dual-engine projection, immersive object-based sound system, customized auditorium design and advanced remastering processes etc. The latest CGS laser system emerges as the highest ROI solution by providing easy to use, easy to service, high brightness and high contrast imagery with lower total cost of ownership (TCO).

CGS worldwide installation has a coverage of 145 cities as of November 2018, including in Hong Kong, United States and Southeast Asia. CGS has also become the preferred choice by cinemas for its strong brand value. Since 2014, CGS cinemas have served over 55 million moviegoers, proving its power in attracting audiences. Thanks to the high recognition by major Hollywood studios as well as the Chinese ones, CGS has created over 540 masters, including 266 Chinese titles and 274 titles of other languages, many of which were top box-office performers of the year.

At “A Focus on China” presented on the first day of the 2018 CineAsia, CGS General Manager Jimmy Chen, representing the Chinese advanced cinema technology, explained the proprietary and technological DNA of CGS and how they unlock the international market. 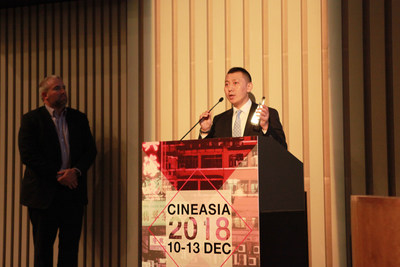 “Movie is an art, where all directors hope to improve visual effects through high-end technology, and perfectly display their film creations. The Premium Large Format (PLF) is undoubtedly the best solution in terms of film remastering and projection. The Premium Large Format (PLF) global market has maintained a 2-digital growth in recent years, with Asia-Pacific as the fastest growing region compared with the rest world due to the strong engine of China, according to data of 2017,” CGS General Manager Chen Jingmin said. “The winning of the PLF Technology Award is of great significance to CGS as a representative of China’s Premium Large Format (PLF) brands and indicates China’s high-end cinema technologies with its own intellectual property rights (IPR) have won recognition on the world stage. I am honored to accept this award on behalf of CGS and China’s film industry, and I would like to thank the organizer of the 2018 CineAsia for its recognition and support for CGS. In the future, we will continue our investment in R&D to promote the development of the global film industry with innovations!”

CGS is one of the leading international PLF (Premium Large Format) brands, committed to providing outstanding immersive viewing experience solutions. As of the first half of 2018, CGS had 320 + cinemas in 145 cities nationwide, on top of its existing deployments in Hong Kong, United States and Southeast Asia.