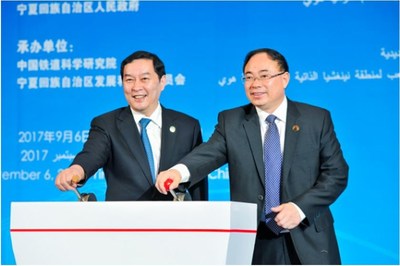 Special guests who gave speeches at the ceremony include Mr. Zhang Chaochao, Vice Governor from the autonomous region, and Dr. Kamal Babiker, Assistant Secretary of the Arab League. In addition, Liu Zhenfang, Vice General Manager of China Railway Corporation delivered a keynote speech, giving an overall review of the achievements of China’s high-speed rail and the international exchanges and cooperation in its railway sector.

As Liu noted in his speech, Chinese leaders called for joint Chinese and Arab efforts to build the Belt and Road Initiative at the 6th Ministerial Meeting of the China-Arab Cooperation Forum in 2014. Later, when delivering a speech at the Arab League Headquarters in 2016, Chinese leaders underlined China’s readiness to work with Arab states to jointly build the initiative and expand common ground in their respective effort to achieve national renewal by speeding up the introduction of high-speed rail and other new and high technologies, so as to add more value to the pragmatic cooperation between China and Arab states. In line with the practical needs and long-term development of China-Arab states cooperation, these important remarks by the President invigorated the bilateral railway cooperation with a clear direction. Recent years have witnessed ever increasing interests in railway exchanges and cooperation. Railway sector in China is ready to work with its counterparts in the Arab states and Muslim world in accordance with the principles of “extensive consultation, joint efforts and shared benefits” to step up cooperation in high-speed rail as a new chapter in bilateral railway collaboration.

As a significant component of the conference, the three-day China High-speed Rail Technology Exhibition coincided with the Expo. The exhibition consisted of two parts – China’s achievements in railway and international railway cooperation. In an exhibition area of over 1,000 square meters, the Chinese conglomerates showcased their latest innovation in engineering, construction, equipment manufacturing, operation and management of railway, particularly high-speed rail, as well as the results of international exchanges and cooperation, aiming to facilitate win-win cooperation in rail transit between China and the Arab states and beyond.

More Russian Weapons for Serbia Despite US Sanction Threats
BELGRADE, SERBIA - Serbia has received a sophisticated anti-aircraft system from Russia, despite possible sanctions against the Balkan state, which is formally seeking European Union President Aleksandar...

Syrian Capital Rocked by Explosions as Israel Hits Targets
DAMASCUS, SYRIA - Syria's capital was rocked by multiple explosions late Sunday, and the country's air defenses fired back in the latest attack by Israel on targets in ...