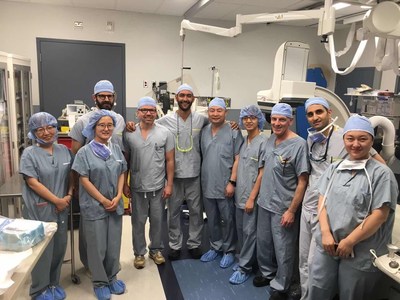 Percutaneous pulmonary valve implantation has emerged as a successful alternative to surgical valve implantation in such patients. However, the currently available balloon-expandable percutaneous valves are suitable only for outflow tracts reconstructed with cylindrical surgical tubes. Treatment of pulmonary regurgitation in the setting of prior RVOT patch augmentation has traditionally been limited to surgical intervention. This is mainly due to the limited available sizes of balloon-expandable valves relative to often severely dilated outflow tracts.

The self-expanding VenusP-valve has been developed specifically for percutaneous use in the native RVOTs to overcome the challenge of the larger outflow tracts and can fulfill the needs of more than 85% of patients who are keen to avoid sternotomy and cardiopulmonary bypass during traditional valve replacement surgery.

The procedure was performed on two patients who were previously treated with surgical patch correction for tetralogy of Fallot. Dr. Ronald G Carere and Dr. Mounir Riahi (St Paul ‘s Hospital, Canada) agreed with Dr. Shakeel Qureshi (Evelina Children’s Hospital, Great Britain) and Dr. Gejun Zhang (Fuwai Hospital, China) that these patients were more at risk of reventriculotomy, and the currently available transcatheter pulmonary valve products were not suitable for these cases. The expert team selected the VenusP-Valve as the most suitable device to serve this unmet need. Dr. Carere said: “The VenusP-Valve performed beautifully and has a simple to operate delivery system. We are very happy to have this device in our center, and we look forward to having it widely available in Canada.”

In recent years, the transcatheter artificial heart valve systems developed by Venus Medtech have been attracting more and more attention worldwide. The upcoming VenusP-Valve global multi-center clinical trial has received more than 200 applications from nearly 30 countries worldwide. The VenusP-Valve was first implanted in Canada, marking the official entry into the North American market, and the company is expected to officially launch the FDA clinical trial in 2019.