DUBAI, United Arab Emirates, Oct. 24, 2019 /PRNewswire/ — World Federation of Neurology — The road to caring for patients with epilepsy is leading to more effective options for patients of all ages, according to expert findings unveiled by members of the World Federation of Neurology. Breakthrough advances in epilepsy research will take center stage as the Federation hosts the XXIV World Congress of Neurology (WCN 2019) in Dubai, UAE, Oct. 27-31, 2019. Epilepsy is the most common neurological disorder in both children and adults. WCN 2019 will highlight three critical areas of epilepsy research and treatment with particular emphasis on how the disorder impacts women and children. 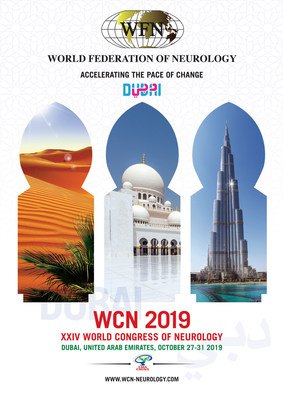 New Ways Forward in Childhood Epilepsy: Fact or Hype?
Even with a considerable increase in the number of antiepileptic drugs developed in the past three decades, the portion of resistant individuals remains the same—about 30 percent of the population.

“Children with early-onset epilepsy are more at risk of being resistant to medication than other groups,” said Helen Cross, MD, PhD, professor at UCL-Great Ormond Street Institute of Child Health. “Because of this, seizures are ongoing and learning development is affected. If doctors can improve seizure control, it would lead to an increase in the child’s ability to learn, their chance of being seizure-free and a better quality of life.”

With advances in brain imaging and a deeper understanding of genetics, researchers have uncovered more causes of epilepsy in the drug-resistant population and are revising how they undertake treatment considerations, particularly in the early onset of complex epilepsies.

These developments could pave the way for early diagnosis and prompt, targeted treatment, making true precision medicine an attainable goal.

Phenotyping specific epilepsy syndromes has allowed new treatments to be determined and evaluated, and has identified which treatments to avoid. By determining the specific cause of the syndrome, researchers can narrow their focus on more precise treatments, which may make a difference in the long-term outcome for patients. In the area of genetic abnormalities, the underlying pathophysiology can realize other targets within the pathways that have been identified and lead the way for immunotherapy for immune-mediated epilepsies.

“Insights into the brain and genetic pathways have changed the focus from suppressing seizures to understanding the cause, in order to prevent seizures and improve neurodevelopmental outcomes,” said Prof. Cross.

Attention Deficit Hyperactivity Disorder (ADHD) and Epilepsy
“ADHD is reported to be prevalent in 30 to 40 percent of children with epilepsy in ADHD-targeted epilepsy studies,” said Jo Wilmshurst, MBBS, MD, MRCP, FCPaed, Head of the Red Cross Children’s Hospital’s Department of Pediatric Neurology. As population studies report lower figures, unless the comorbidity is specifically looked for, ADHD can be missed.

“Since the comorbidity of ADHD in children with epilepsy is associated with a significant impact on quality of life, it’s important to find medical interventions that support positive outcomes for both epilepsy and ADHD,” said Prof. Wilmshurst.

Clinicians have many concerns when treating ADHD in children and adolescents with epilepsy, including how to distinguish ADHD from other conditions, and manage it without exacerbating the seizures. Based on these identified concerns, researchers conducted a systematic review of studies on the screening, diagnosis, and management of ADHD in children with epilepsy, then documented the quality of evidence and the strength of the recommendations. Their findings include American Academy of Neurology practice parameter Level B evidence supporting the efficacy of methylphenidate in children with epilepsy and comorbid ADHD. They also revealed Level B evidence that poor seizure control is associated with increased risk of ADHD, and Level A evidence that children who have epilepsy with comorbid intellectual and developmental disabilities are at increased risk of ADHD, among other findings.

“Thanks to the work of the Pediatric Commission Comorbidities Task Force, patients have better access to care and physicians are better-equipped to aid patients,” said Prof. Wilmshurst. “With this review, we can narrow down areas requiring more research and better design studies to create consistency in the methodology and focus on direct study questions.”

Practical Management of Epilepsy and Pregnancy
Epilepsy can have serious consequences if seizures aren’t controlled, resulting in particular challenges for pregnant women. The challenge is to find an effective treatment, with fewer side effects during pregnancy.

“Every mother is worried about the outcome of her pregnancy—the worry is no less for a woman with epilepsy,” said Torbjörn Tomson, MD, PhD, a professor at Karolinska Institute.

His WCN 2019 lecture on Sunday, Oct. 27 2019, “Practical Management of Epilepsy and Pregnancy” explores the risks, challenges, and goals in the management of maternal epilepsy with antiepileptic drugs (AEDs). The research addresses the need to balance the risks associated with antiepileptic drug use during pregnancy against those associated with poorly controlled epilepsy for both the mother and child.

“If we look at the changes in drug selection in epilepsy treatment over the past 10 to 15 years, we’ve seen major changes in the drugs used,” said Prof. Tomson. “In parallel with such changes, we found that the rates of malformations in the offspring have gone down recently.”

This study revealed that treatment choices make a difference in the safety of the offspring. The rate of malformations 15 years ago was 6 percent. But recent research places the rate at 4.4 percent, reducing the risk of offspring malformations by 27 percent.

“We need to continue to collect information on the new antiepileptic drugs to know to what extent they contribute to improved outcomes during pregnancy,” said Prof. Tomson. “But the most important takeaway is that women with epilepsy should discuss future pregnancies with their physicians well in advance of conception to discuss treatment options.”

About the World Federation of Neurology
The World Federation of Neurology represents 120 member neurological societies around the globe to foster quality neurology and brain health worldwide by promoting neurological education and training with an emphasis on under-resourced areas of the world. WFN supports the spread of accurate research and clinical information in the pursuit of improvements in the field of neurology. With support from member organizations around the globe, WFN unites the world to allow patients greater access to brain health. For more information, please visit the WCN 2019 web site at www.wfneurology.org, find our live stream press conferences on Facebook at https://www.facebook.com/wfneurology/, on Twitter at https://twitter.com/wfneurology or by searching using the tag #WCN2019.

https://syrianewsgazette.com/world-federation-of-neurology-reveals-new-frontiers-in-epilepsy-treatment-for-children-pregnant-women-and-new-links-between-adhd-and-epilepsy-at-24th-annual-world-congress-of-neurology-dubai-oct-2/2019-10-24T13:08:20+00:00Asianet PakistanPress Release
DUBAI, United Arab Emirates, Oct. 24, 2019 /PRNewswire/ — World Federation of Neurology — The road to caring for patients with epilepsy is leading to more effective options for patients of all ages, according to expert findings unveiled by members of the World Federation of Neurology. Breakthrough advances in epilepsy...
Asianet Pakistanasianet-pakistan@pr.asianetpakistan.comContributorSyria News Gazette

Amika Mobile Products Selected for Testing for COVID-19 Contact Tracking by Government of Canada
OTTAWA / ACCESSWIRE / May 28, 2020 / Amika Mobile‘s situational awareness, command and control products the Amika Mobility Server (AMS) and its mobile apps including Amika®Panic and Amika®Guard that provide 2-way communications over...